Who is a Developer Ambassador?

Uncovering the Role and Responsibilities of Developer Ambassadors 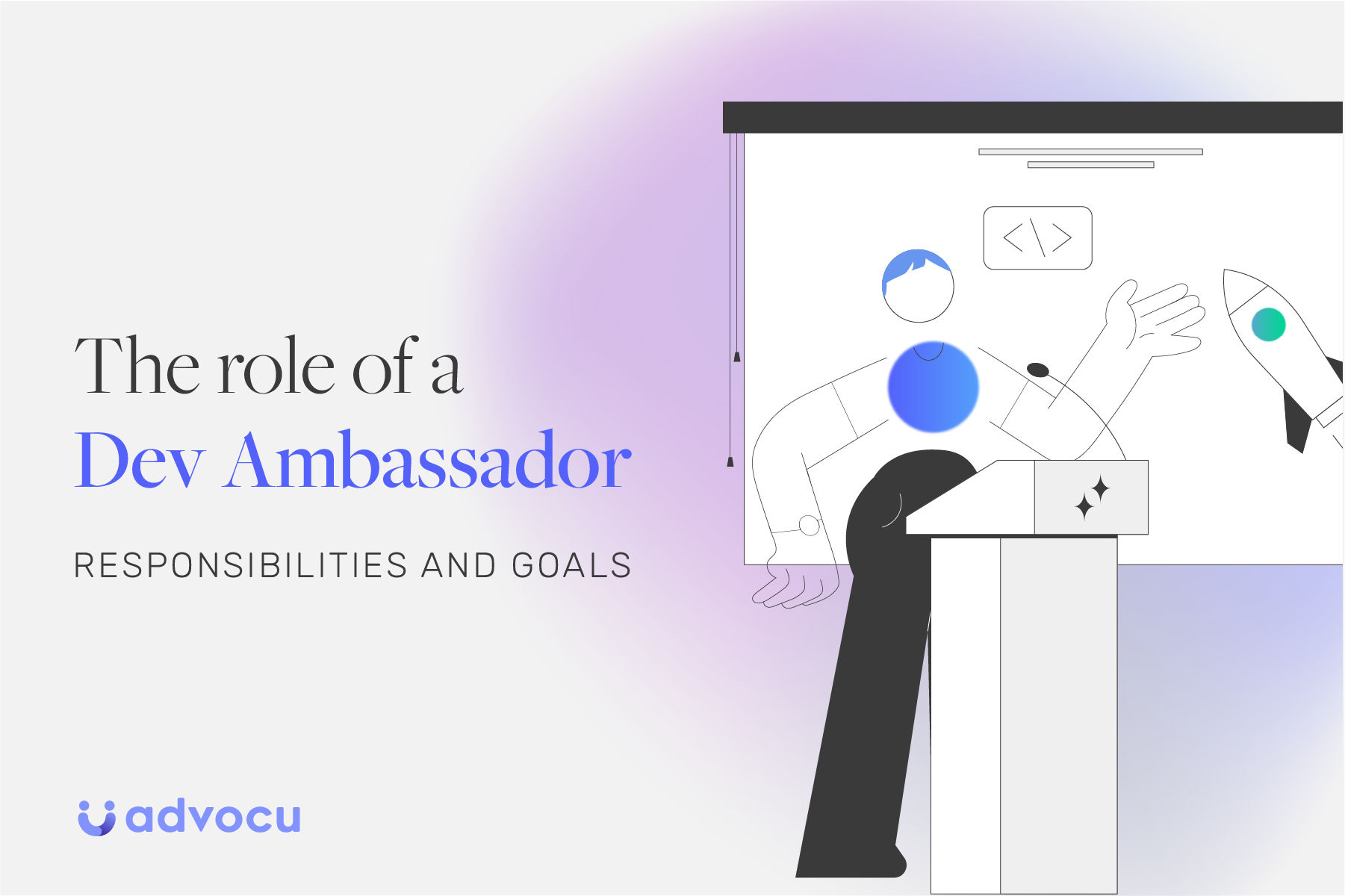 What's on this page

As the tech industry continues to grow and evolve, the role of a developer ambassadors has become increasingly important. We see more and more companies creating Developer Ambassador programs to recognize their most engaged tech community members.

Who is a Developer Ambassador?

Developer ambassadors are the most engaged members of your developer community, passionate about your product and its potential. They act not only as experts on your technology within the community, but also go above and beyond to help others create with it.

Why the "Developer" Ambassador?

This concept is particularly relevant for developer products, where the value of your technology or product is often realized through its integration into your customer's products, the use of your programming language or the integration with your APIs. In these cases, developer ambassadors play a vital role in supporting and enabling other developers to get the most out of your technology, making them valuable assets to your company and the tech community as a whole.

How is the role of Dev Ambassador and Advocate different?

Well, the biggest difference is usually where they sit within the company. Developer advocates are typically part of the internal team, hired by the company to promote its technology and engage with the developer community.

On the other hand, developer ambassadors may be external community members who contribute their time and expertise to promoting the company's technology and engaging with developers, often in exchange for recognition, direct access to resources, or other perks. They often contribute their free time to creating guides, educational content, documentation, speaking at conferences, and organizing events, all in the name of growing their personal brand, developing new skills, and advancing their careers.

What is a Developer Ambassador program?

So what... every person who contributes in the developer community or in open source projects an "Ambassador"? Fortunately, not.

These programs usually come with a set of guidelines and resources to help the ambassadors succeed in their roles and represent your company to the best of their abilities. And because everyone loves a good reward, developer ambassador programs often include incentives like training materials, access to exclusive events, and of course, recognition for their hard work.

The end goal? A strong, supportive tech community that's full of collaboration and partnerships, all while promoting your company's technology and brand to a wider audience. So if you want to nurture the tech community and drive adoption of your products, a developer ambassador program might just be the way to go.

From Google Developer Experts to Microsoft MVPs, developer ambassador programs are the ultimate way for companies to show love to their most active tech community members. There are tons of different programs out there, each with its own unique name and process, but the goal is always the same: to support and recognize the peeps who are killing it in the tech world. And lucky for you, below you'll find some examples of these amazing programs!

Google Developer Experts – program created by Google, gathering over 1000 of professionals, who day by day write content, speak on the conferences and educate about Google technologies.

GitHub Stars – a hall of fame for most engaged GitHub community members, who serves the community as the experts of the product.

Women Techmakers – another program created by Google, which focuses on supporting and educating women in tech. Near 2000 fanatics women ambassadors and tech professionals who create technical content about Google technologies and are embracing concept where women thrive in tech.

Docker Captains Program – which gathers members of the Docker community that are both experts in their field and are passionate about sharing their Docker knowledge with others.

What is a Student Ambassador program?

You might have heard of a similar concept called student ambassador programs. These programs are another way for big tech companies to spread knowledge and awareness about their technology, particularly among university students who are shaping the future of the tech industry.

Student ambassadors are typically university students who are selected to lead local tech communities within their universities. These students work with the support and guidance of the company that created the program to learn and grow their careers, while also serving as advocates for the company's technology within their university communities. Through club meetings and other activities, student ambassadors have the opportunity to engage with experts from the company and learn from their experience and knowledge.

In short, student ambassador programs are a win-win for both the company and the students involved. The company gets the chance to engage with and support the next generation of tech professionals, while the students get the opportunity to learn, grow their careers, and shape the direction of the tech industry.

How to become a Developer Ambassador?

Ready to join the ranks of the developer ambassadors? Here's what you need to know to get started.

First things first, check out the company or technology you're interested in and see if they have a formal developer ambassador program in place. These programs usually, in order of finding ambassadors, have an application process that includes a review of your technical skills, social media presence, and experience.

Depending on the exclusivity of the program and its goals, you may also be asked to provide information about conference talks you've given, content you've created, or events you've organized. The application process may also include an interview, where you'll be asked about your motivations and goals for joining the program.

But what if the company you're interested in doesn't have a formal program in place? No problem! Just get involved with the developer community and start contributing. Trust us, the best companies are always on the lookout for their most engaged and enthusiastic members, and they'll likely reach out to you to thank you for your contributions and propose joining their program. Or, you might even be nominated by another community member to become an official ambassador. So get out there, start networking, and let your passion for tech shine!

The specific tasks and responsibilities of a developer ambassador may vary depending on the company and the needs of the tech community.

This may involve writing blog posts, creating videos, contributing to the documentation, translating the technical articles into different languages, preparing code samples or other technical resources.

Developer ambassador may be responsible for organizing or leading events such as hackathons, workshops, or local meetups.

Dev ambassadors are often speaking at the conferences and meetups, mainly to show how to solve technical problems with your product.

As a developer ambassador, you have the opportunity to make a real impact in the tech industry by promoting the company's technology, engaging with the tech community, and serving as a technical resource and advocate. Whether you're just starting out on your journey as a developer ambassador or you're a seasoned pro, there are always new challenges and opportunities to learn and grow.

So embrace the role, get involved, and make the most of your time as a developer ambassador! 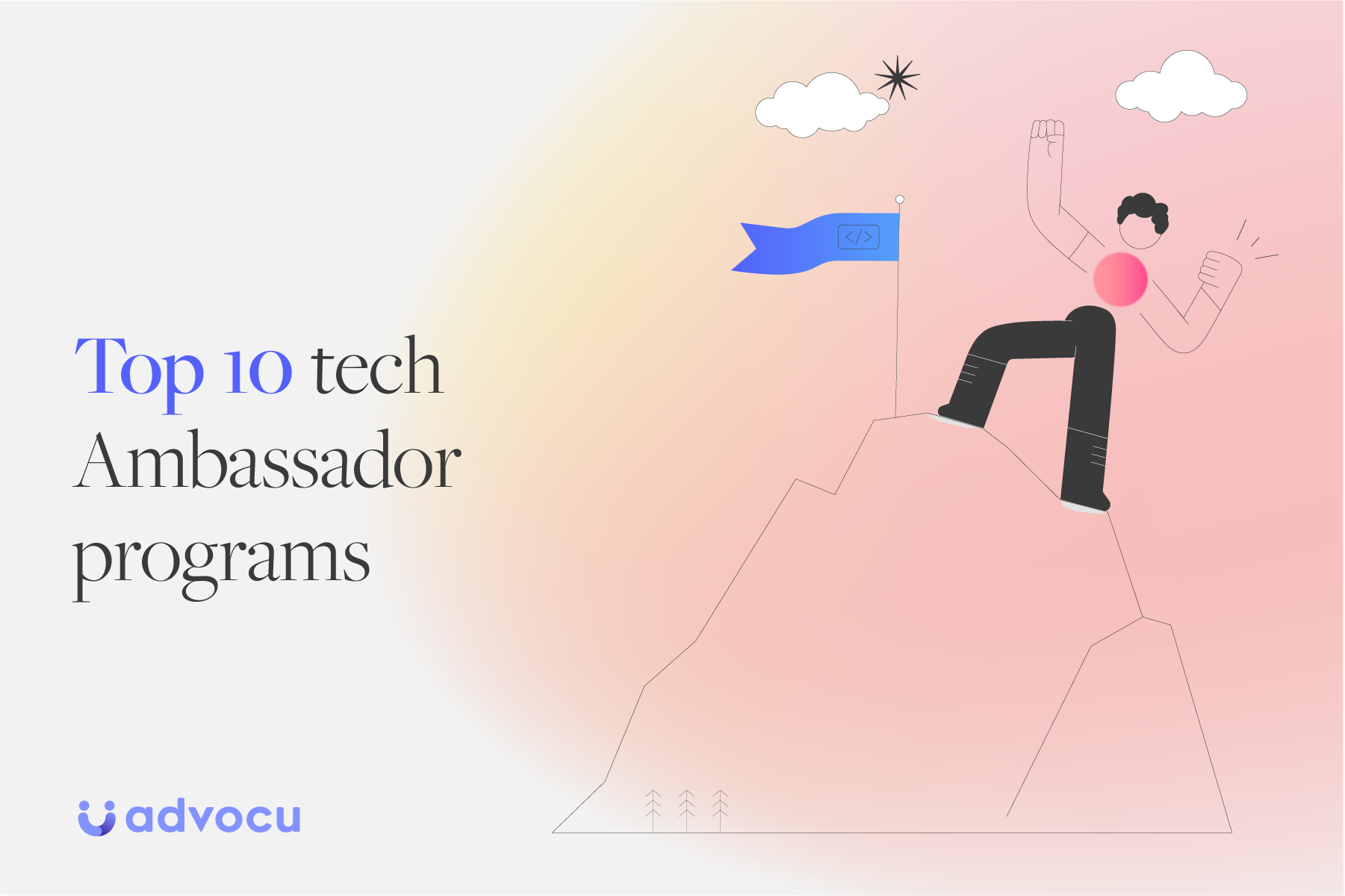 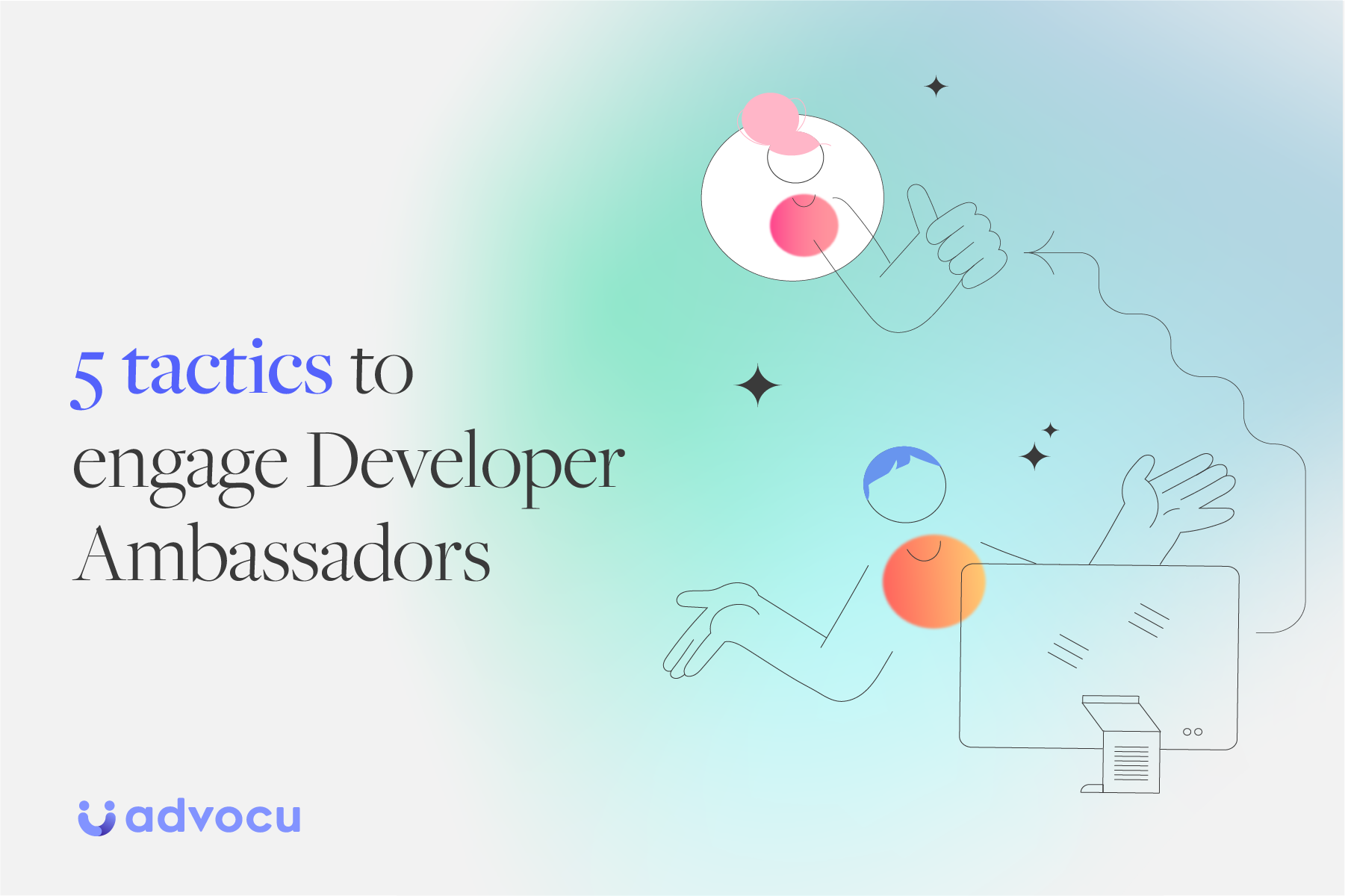 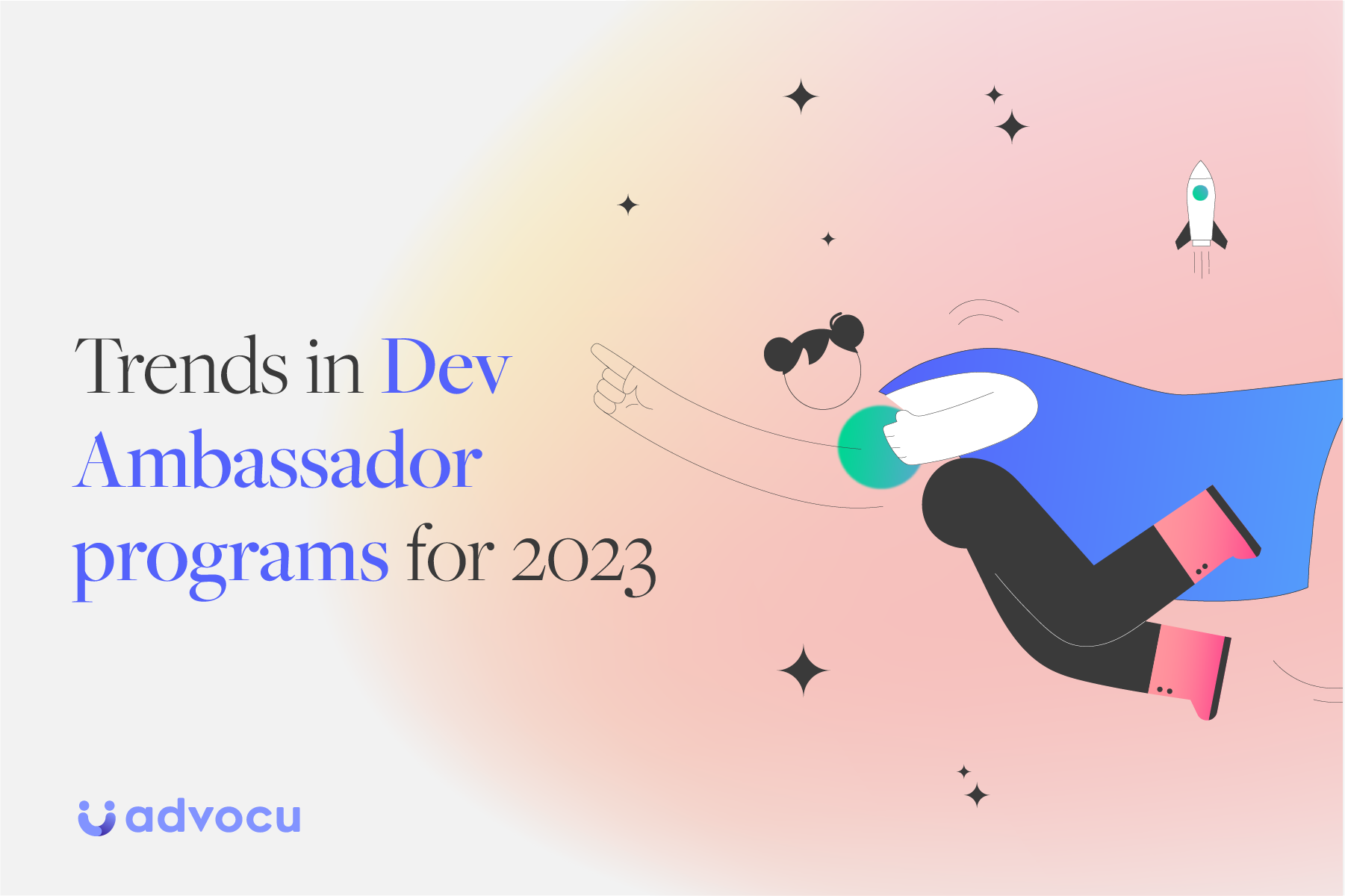 The Future is Now: Top 7 Trends in Developer Ambassador programs for 2023

By clicking “Accept”, you agree to the storing of cookies on your device to enhance site navigation, analyze site usage, and assist in our marketing efforts. View our Privacy Policy for more information.
DenyAccept